Competitive Highland dancers must be registered with the Scottish Official Board of Highland Dancing and the Federation of United States Teachers and Adjudicators. Dancers in the Premier and Pre-Premier categories compete in traditional Scottish Highland dances before a judge. Pre-Premier includes Primary, Beginner, Novice, and Intermediate levels. Dancers must register for competitions and may earn medals or trophies. Dancers earning a first, second, or third place in a Highland dance earn stamps, which are accumulated to move up through the specific levels.

While watching the dancing competition, spectators often note that competitors are performing different steps, This is not because the individual is in error, but rather each dancer performs their choice of steps within a range as set out by the Scottish Official Board of Highland Dancing (SOBHD)  The variety of steps adds interest to a competition and tests each dancer’s ability to concentrate.

The National Dances are more modern than the Highland Dances and were developed so women could participate. The costume worn by women is called the Aboyne dress named in honor of the Aboyne Highland Games in Scotland where women were forbidden to wear the traditional Highland outfit. The National Dances are much more rhythmic and balletic; however, they still require quick and precise movements. Some of the dances are the Scottish Lilt, Village Maid, Blue Bonnets, and Scotch Measure. Several National Dances are performed in the kilt since they were originally men’s dances. Men also perform all the dances and wear the traditional Highland outfit. 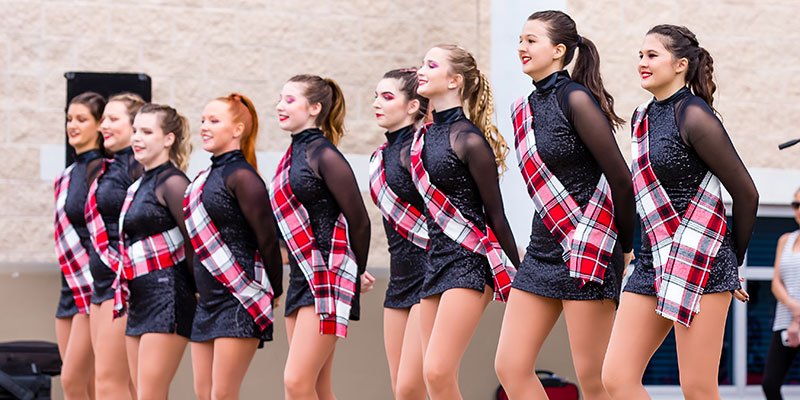 A Bit of History

Developed in the rugged Scottish Highlands sometime around the 11th century, there are three basic dances: the Sword Dance, the Highland Fling, and the Seann Trubhas. The first two were originally danced exclusively by men before the beginning of battle to ensure good luck and to instill the proper fighting spirit.

Weapons played important roles in these dances. The Gillie Calum is danced on crossed swords and to touch a sword during the dance was considered bad luck. The Highland Fling was originally danced on the Highlander’s small leather shield, called a targ and is danced in place today.

Because of their warlike nature and their intrinsic importance in Highland culture, these dances (along with the kilt) were outlawed by the English in the wake of the Stuart Rebellion of 1745. These proscriptions were officially lifted in 1786, and a new dance, the Seann Truibhas or “Old Trousers” was created.

This dance features a kicking motion, which describes and celebrates the Scots’ kicking off their hated trousers to put on the kilt. Today, all these dances are done in modern Highland dress by men, women and/or children. Novelty exhibition dances, such as Flora MacDonald’s Fancy, the Sailor’s Hornpipe, and the Irish Jig are danced in special costume.

The Scottish version of the Irish Jig is meant to parody an angry Irish washerwoman when she finds out some neighborhood boys have knocked all her clean wash to the ground. Another version describes a woman who shakes her firsts and flounces her skirt because she is furious with her husband who has been out drinking until the wee hours.

The Sailor’s Hornpipe requires strength and stamina to mimic in dance a variety of shipboard tasks including swabbing the deck, climbing the ship’s rigging, standing watch, and hauling in rope. The Hornpipe is danced in a British sailor’s uniform and derived its name from the fact that usually the musical accompaniment was played on a hornpipe rather than bagpipes.

The 2023 Florida Open Championship dance entry link will be posted here when approved by governing bodies.