One of the most iconic elements of the Dunedin Highland Games must be the sound of the Great Highland Bagpipe. We are very excited to announce, that our bagpipe and drum competitions are EUSPBA sanctioned events. Open to piping and drumming grades V-I and professional. 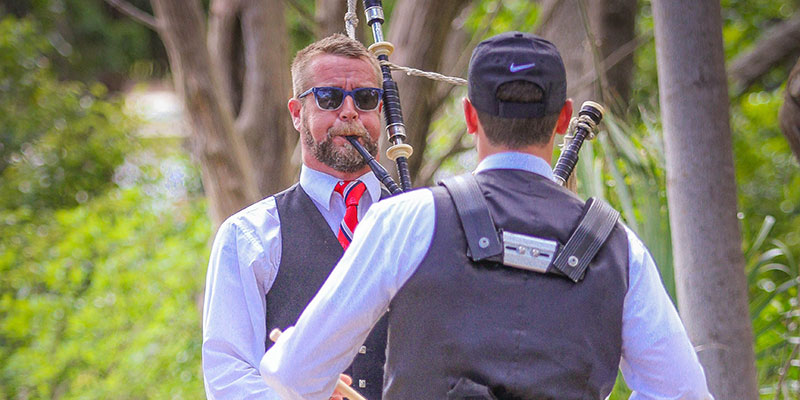 The 2023 Registration is now open! Choose the appropriate category above to get started.

The skill level of these bagpipers ranges from Grade V to Grade I. In each grade level, the bagpiper prepares a tune to perform for the judge. The judge then ranks the competitors based upon their tuning, musical execution, and technical skill. The piper may perform their tune either marching back and forth or standing still.

The snare drummer plays the music of their choosing for the judge and is accompanied by one or two bagpipers when required by the event. The drummer will be judged on their musical, tonal, and technical skill.

The tenor drummer plays the music of their choosing for the judge and is accompanied by one or two bagpipers when required by the event. The tenor drummer is evaluated in the same manner as the snare drummer with an additional category for the visual effect

The bagpipe band consists of at least six bagpipers, two snare drummers, and one bass drummer. The bands are Grade III or higher and must also have at least one tenor drummer. The bands play the competition music set that they have prepared for each of the events. They are judged by one or two piping judges, one drumming judge, and one ensemble judge. Each judge awards the band a score between 0 and 100. The winner of the competition is determined by ranking the bands by scores received from each judge.